Twenty years ago, Special Olympics Wisconsin staff members Kerry Gloede and Bill Fish along with the Chief of the Onalaska Police Department, Randy Williams, traveled all the way out to Alaska for a Law Enforcement Torch Run conference.

While there, they observed a bizarre event called the Polar Bear Plunge. In this activity that seemed like something only inhabitants of the Last Frontier could be foolhardy enough to do, Alaskans were intentionally throwing themselves into Alaska’s famously frigid and harsh waters. But the most bizarre part was, the participants were having fun!

“We just thought, this is such a great idea and I think people would do this.” – Kerry Gloede

It didn’t take long for the Wisconsin delegation to start brainstorming about how this tradition could be adapted for the similar climate, and similarly hardy residents, of Wisconsin. In fact, they hadn’t even made it out the state. While sitting in an airport bar in Alaska waiting for their flight back, the three started to lay out their plan of action on some old menus.

“We just thought, this is such a great idea and I think people would do this,” Gloede said. “We asked the waitress for some old menus that we could write on and we sat there and we wrote some goals: who we wanted to get involved, what our goals would be, how much to get a t-shirt.” 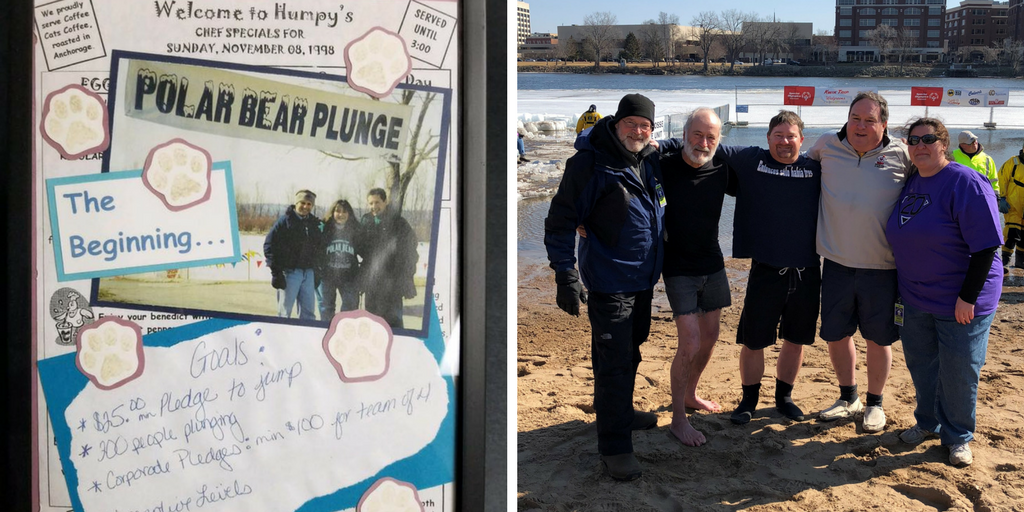 The menu and notes that started it all in 1998 and the five who were around for the first Plunge now celebrating its 20th in 2018: (L to R) Mark Moan, Plunger Edward Gray, Plunger Keith Torgerud, Plunger Patrick Scheller and Plunge organizer Kerry Gloede

“I don’t even know that I would have believed that we’d be doing it 20 years from after we did that first Plunge – much less having countless Plunges every year raising millions of dollars.” – Gloede

On March 3 of this year, Gloede and the select few who have been around for it all celebrated the 20th annual Polar Plunge for Special Olympics Wisconsin in La Crosse, where it all began.

The overwhelming success in raising funds and support for Special Olympics Wisconsin since that pioneering group brought it back from Alaska and held the first one in March of 1999 has probably surprised Gloede as much as anyone.

“I don’t even know that I would have believed that we’d be doing it 20 years from after we did that first Plunge – much less having countless Plunges every year raising millions of dollars. That was not something I think we ever expected,” said Gloede, who has organized all 20 La Crosse Plunges. To celebrate the 20th Plunge, Gloede (purple shirt) took it herself this year alongside friends like 20-time plunger Torgerud

Although Gloede is the only one of that original group still involved in putting on the Plunge, she does have a small group of plungers who have been with her through it all. Keith Torgerud, Patrick Scheller and Edward Gray are the three remaining plungers who have participated in every single La Crosse Polar Plunge. Their team name this year was “Entonces solo habia tres” – Spanish for “Until there were only three.”

The three really bonded about ten years ago when they realized they were the only ones left who had plunged every year. “We found out we were the only three guys remaining so we kind of got together,” Scheller said.

It’s likely the group will keep the streak going for as long as they can too. “I’m a traditionalist. I don’t give up on anything,” Scheller said. The Polar Plunge is now a bona fide Wisconsin tradition – thousands of friends, family members and co-workers come together every year to show support for SOWI athletes

With more than 600 plungers participating in the 20th annual La Crosse Polar Plunge this year, it looks like the residents of La Crosse and the greater Coulee Region will be keeping the original Polar Plunge for Special Olympics Wisconsin going strong for some time too.

“To see so many people support Special Olympics, and not just so much the raising money, but just creating awareness of the programs and of our athletes and getting them out in the community, I just think it’s amazing,” Gloede said. “And to just continue doing it for 20 years, have people come out, volunteers that support us, the spectators watching – just everybody, it’s truly just the greatest thing.”