In 1962, President John F. Kennedy signed a proclamation which designated May 15 as Peace Officers Memorial Day and the week in which that date falls as Police Week. Currently, tens of thousands of law enforcement officers from around the world converge on Washington, D.C., to participate in a number of planned events which honor those that have paid the ultimate sacrifice.

Our partners with the Wisconsin Professional Police Association (WPPA) will hold its annual Wisconsin Law Enforcement Memorial Ceremony on Friday, May 20 in Madison. The ceremony, honoring and remembering Wisconsin law enforcement officers killed in the line of duty, is held in correlation with National Police Week activities. More information about the Ceremony can be found on the WPPA website here. 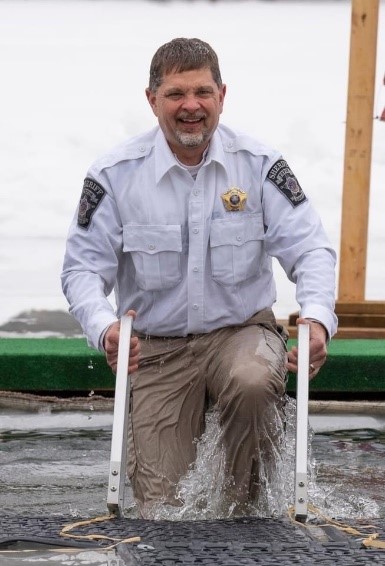 Joel has been a law enforcement officer for 31 years–27 of which coming with the Pepin County Sheriff’s Office. He started out in the jail dispatch center, was a DARE Officer, worked in the patrol division, and was elected Sheriff in 2014 where se served for eight years.

His Aunt Theresa had down syndrome, and he became more actively involved in SOWI about 15 years ago as a deputy helping to organize a local leg of the Torch Run. When he became Sheriff he started attending the Summer Games in Stevens Point and found it so rewarding to welcome the athletes into the stadium at the opening ceremony and watching them compete. He has participated in Texas Roadhouse Special Olympics events, Red Robin “Tip a Cop”, Dunkin Donuts “Cop on a Roof”, Eau Claire Polar Plunge (shown here at the 2022 plunge this March), The Eau Claire Buckshot Run, and the Law Enforcement Torch Run.

“I am proud to say that I was able to introduce my daughters to Special Olympics,” Sheriff Wener said. “Both have shown interest in becoming more involved in Special Olympics and the athletes as they are both now adults.”

He has been a SOWI Board of Directors member for the last 3 years, which he also finds rewarding.

Thank you Joel for all that you do for Special Olympics Wisconsin! Bryan is a Patrol Officer with Burlington Police Department and has been involved with Special Olympics Wisconsin for almost 20 years.

He is actively engaged in many community fundraising efforts such as the Polar Plunge, Cops on a Rooftop, Texas Roadhouse and many more! His favorite Special Olympics memories are seeing the joy on the athlete’s faces when they finish competing.

Bryan is a person who likes to get things done and has Special Olympics Wisconsin athletes attached to his heart!  We appreciate him! Jeff Beck is a Patrol Officer with the Sauk Prairie Police Department and has been involved with Special Olympics Wisconsin since 2009.

Jeff stated his favorite memory of being involved with Special Olympics Wisconsin is coaching Jake Casper, David Thompson, and Cameron Johnson in powerlifting where he had the honor of seeing them accomplish their goals throughout the year and compete at the State Summer Games. Eric has been a member of law enforcement for 11 years and has been involved in the Special Olympics Wisconsin organization for 13 years, starting on a Polar Plunge planning committee. Eric is a part of the LETR State Council and has been an Assistant Director. Each year he plans and participates in the Final Leg Torch Run Bike Ride, the Opening Ceremonies of State Games, Tip-A-Cop, Polar Plunge, and he started the Run With the Cops in Wisconsin Rapids.

Eric had the opportunity to attend the National LETR Conference in Nashville and Las Vegas and was the 2016 SOWI Volunteer of the year! We cannot thank Eric enough for the time and contributions he has given Special Olympics Wisconsin and the difference he has made in the lives of our athletes. Captain Chris Tarmann of the University of Wisconsin-Oshkosh Police Department has been a Special Olympics Wisconsin Law Enforcement Torch Run (LETR) partner for more than a decade.

Chris began as an event volunteer at a few local athlete competitions where he loved the interaction with the athletes. He then assisted with the Cops Gone Wild fundraiser benefiting Special Olympics through Buffalo Wild Wings and eventually helped out with local Polar Plunges. Chris also helped lead the Run With The Cops event–a 5K run/walk benefitting Special Olympics Wisconsin.  The event brings together the community and law enforcement agencies from around the state for a great cause.

Last November, Chris was announced as the Wisconsin representative for the 2022 Special Olympics USA Games Torch Run Final Leg–a two-week event kicking off at Soldier Field in Chicago and culminating at the USA Games in Orlando, Fla.