Winter Warriors hit the slopes and trails of Wausau this weekend When the 160+ SOWI athletes from across the state converge on Wausau this weekend for the Special Olympics Wisconsin State Winter Games, they’ll be bringing a nice mix of winter warrior experience.

For SOWI athletes Heidi Van Abel, Daina Shilts and Kyle Robinson, the Winter Games will give them a chance to return to high-level action after they competed in the World Winter Games in Austria last year.

“At the Winter Games I’m around a bunch of friends. That motivates me. I get motivated by friends.” – SOWI cross-country skier Heidi Van Abel

Cross country skier Heidi Van Abel of Manitowoc will be hitting the course again, where she’s looking to add to her medal collection that now includes a silver from Austria. She’s most excited for her specialty, the 1k cross country race. It’s where she nabbed the silver last year in the World Games that she unsurprisingly ranks as the best experience of her lifetime. It even included a hero’s welcome with a full police escort when she returned home to Manitowoc.

Van Abel on the medal stand in Austria

Despite the incomparable highs of last year’s trip, Van Abel has had no problem staying motivated for the State Winter Games. “At the Winter Games I’m around a bunch of friends. That motivates me. I get motivated by friends,” Van Abel said. This motivation has kept her on the trails consistently this winter. And when the trails have lacked snow, she’s even been on them to hike.

But of course, as a true winter warrior, her preference is for there to be snow. “I love the snow. It’s nice and cold. I like it when it’s hard and I can throw snowballs at somebody,” Van Abel said.

“I actually prefer the cold weather. I think it’s nice. It’s a good way to open up your lungs and get some fresh air.” – SOWI snowshoer Jerry Halboth

For Daina Shilts of Neillsville, the Winter Games is another opportunity for her to get on her snowboard. And she never misses an opportunity for that. It will also be a chance to get one last major competition in before she competes in the X Games Unified Snowboarding competition in Aspen for the fourth year in a row next week. Like with Van Abel, much of what appeals to Shilts about the Winter Games is off the course. “My favorite part is seeing all my friends, and the competition of course. And the dance where I can let loose and have fun with all the amazing athletes, coaches and volunteers,” Shilts said. 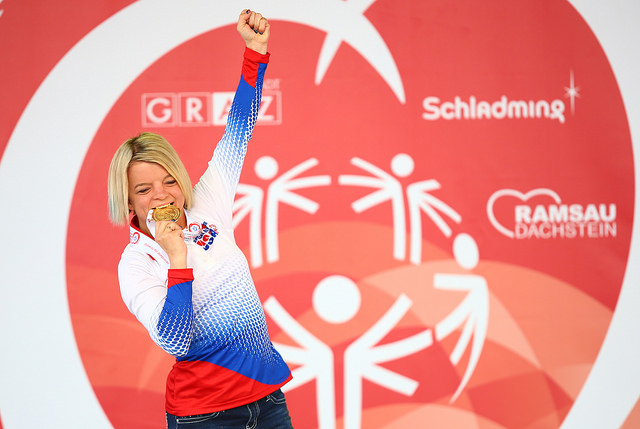 Shilts on the medal stand in Austria

This weekend will be special for a different reason for the third 2017 World Winter Games veteran. For alpine skier Kyle Robinson of Ashland, who snagged a bronze in Austria, these games will be his first since he and fellow Winter Games skier Katelynn Robinson (née Fulweber) married last July. Kyle also holds the distinction of being the only SOWI athlete heading to Seattle in July for the USA Games to be competing in the Winter Games this weekend. He’ll be competing in track and field in Seattle. Training for the USA Games has helped Kyle prepare for the Winter Games and vice versa. “I am going to the gym five days a week to get ready for the USA Games and that has helped me get into shape for skiing also.  Being able to ski is helping me to get more exercise,” Kyle said.

And while Katelynn hasn’t competed in a World Winter Games, she’s by far the ski vet of the couple. She participated in her first State Winter Games in 2009 and this will be her seventh time competing in Wausau against the some of the best skiers in Wisconsin. In fact, Katelynn and her family introduced Kyle to Special Olympics and skiing since it’s something she’s loved to do for so long. “My favorite thing about skiing is going fast. My favorite thing for Winter Games is the skiing,” Katelynn said. “It is fun.  It is good exercise.” While Van Abel, Shilts and the Robinsons are examples of seasoned winter warriors with many Winter Games under their belts, there will also be plenty of newbies like Jerry Halboth of Williams Bay. Although Halboth has been a Special Olympics athlete for 20 years, this will be his first Winter Games. After a recommendation from his flag football coach, Halboth just picked up snowshoeing a year ago to help him train in the winter for football and track, a sport in which he competed in the USA Games in 2014. As he describes it, the weight of the snowshoes and the snow itself make it great training for sprinting.

Halboth going “Over the Edge” at Lambeau Field a few years ago.

Despite taking up the sport initially to cross-train, he’s taken to the winter warrior lifestyle rather quickly. “I actually prefer the cold weather. I think it’s nice. It’s a good way to open up your lungs and get some fresh air,” Halboth said. He’s excited to expand his sports repertoire to the winter sports and he’s looking forward to seeing how his recent snowshoe training on a trail near his home pays of this weekend.

Whether it’s their tenth Winter Games, or their first, one thing is for sure: the winter warriors of Special Olympics Wisconsin will be out in full force this weekend, breathing in the fresh air and feeling the wintry wind on their faces as they speed down mountains or through tree-lined trails. Maybe, like Van Abel, they’ll be playfully throwing snowballs at friends. Sounds like Wausau will be a great place to be this weekend.